Simplified setup and management of an extensive Crestron lighting system

If you could build the home of your dreams, without any worries about money or time, what would it be?

Large enough to entertain in style, yet a great place to chill with your family and friends? Beautifully built, using the best materials and craftsmanship?

With great technology, including elegant lighting and shading, exceptional video and sound, and super-simple control and automation?

This extraordinary, 32,850 square-foot home in the luxury community of Isleworth, outside of Orlando, Florida, has all of that and more, including the Bodhi building management system to simplify setup and ongoing maintenance of its extensive lighting systems. 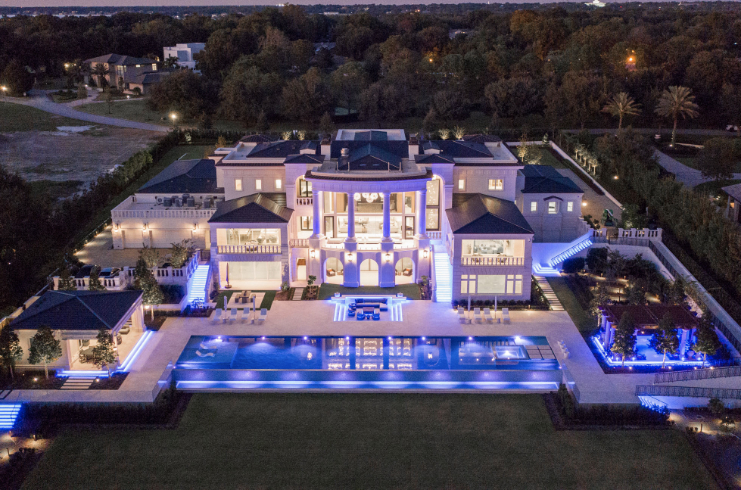 Keeping track of all the technology in a home can be challenging, whether for the homeowner, the builder or the integrator. That’s especially true in this large and complex residence.

“First, we have more than 280 zones of dimming in this home, spread out over three floors plus extensive grounds. Using Bodhi, we cut our programming and setup time by more than half.”

“Second, Bodhi allows us to quickly identify any component that may be slipping out of spec and direct the builder to repair or replace it before it can fail. If we have an outage, we can identify the problem in minutes, minimizing downtime as well as labor for troubleshooting. In this way, Bodhi saves us hour after hour on the ongoing maintenance of the house.”

Built on a grand scale

The home itself is extraordinary, one of the largest and best appointed in central Florida.

It includes an extensive use of limestone and marble, a striking porte-cochère and a color-changing fountain, 24-foot ceilings, an Olympic-sized swimming pool and expansive indoor and outdoor entertainment spaces. Still, it’s clean, open and contemporary.

The exterior of the house is something special, especially at night. Custom-made LED fixtures highlight the home’s features, while color-changing lights on front and back columns, the fountain, a fire pit and a spa in the back and on all stairways (interior and exterior) give it a very special look and feel.

Think Simple split the lighting control into sections, using six Crestron processors for the majority of fixtures (inside and out) plus a Nicolaudie DMX controller for the color-changing lights.

“Programming a lighting system this large, even with Crestron’s simplified programming language, would normally be a huge task,” Vaccarino explains. Then, too, making the inevitable changes that the homeowner might ask for and recompiling the code each time, would also be very time-consuming.

But Bodhi greatly streamlined the project. Now instead of having to write out instructions using a programming language, the Think Simple team chose and set up each device and each scene using drop-down menus. Instead of hard-coding the times for lighting to turn on and off automatically, they set them up on a simple, calendar-based schedule.

And they could do their work from any Internet-connected computer, tablet or phone, either on-site at the home or from anywhere with an Internet connection.

While it’s been more than a year since the house was finished, “we haven’t had any problems with the lighting fixtures, dimmers or control units, and Bodhi will protect us as they age,” Vaccarino notes.

That said, troubleshooting something as simple as a tripped breaker can be a problem for the builder, who holds a maintenance contract on the house, just because there are so many circuits and electrical panels.

“One nice thing about Bodhi is that I get feedback on whether a dimming module is on or not, and, if it’s on, I know the problem is with the breaker, not the module. So if the builder calls me and tells me some of the lights don’t work, I can tell them in a minute if the breaker has blown, and then which panel to visit to reset it.”

In the same way, if the homeowners or their staff want to change the time that the entryway lights turn on or change the lighting levels on the pool deck, they can call and a Think Simple technician can make the change immediately, no matter where he or she might be.

The biggest advantage, though, comes from the use of Bodhi’s Predictive Maintenance feature. Predictive Maintenance tracks the age of each component, its hours of use, and its adherence to its manufacturer’s specifications. Should a component begin to draw more AC power than specified, for example, Bodhi will detect that and send an alert to Think Simple to service or replace that item.

“Of course, we can assign logins with whatever level of access is needed to the homeowner, his staff, the builder and others who regularly work on the home,” Vaccarino adds.

“So far, we’ve handled any lighting control questions under our service contract, but it would be easy enough for others to jump in if there was a need.

“That said, with Bodhi the lighting systems pretty much take care of themselves. It really has made this large and complex project simple.”